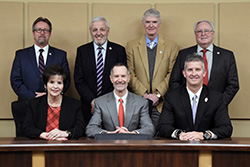 On January 7, 2020 Mentor Ward Councilpersons, reelected by Mentor voters in the November 2019 election, took the oath of office. Those who were sworn in include:

More than 50 residents volunteer their time and expertise to City officials through their participation on City boards and commissions. Citizens are appointed by City Council and represent a valuable resource to the community by making recommendations on various municipal issues. Congratulations and thank you to all who were appointed.