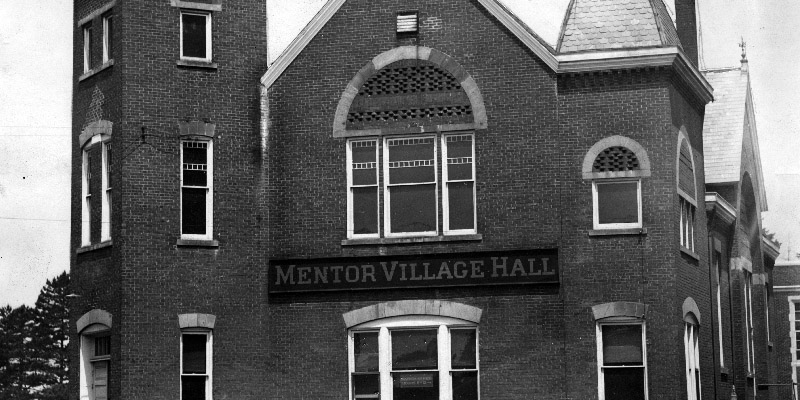 In 1797, Charles Parker, a surveyor with the Connecticut Land Company, built a cabin on the marsh paving the way for other pioneers to establish this new land called the Western Reserve Territory. By 1811, Charles moved on to settle Milan, Ohio, but his younger brother, Clark would spend the rest of his life here. He married Margaret Jordan (whose family settled Concord Township) and they raised 13 children. Part of their property on Mentor Avenue was donated to the newly-established Mentor Methodist Church. Many of Mentor’s first settlers are buried at Mentor Cemetery.

The name Mentor originated in Greek literature; Mentor was the tutor of Telemachus, the son of Odysseus. Other place names in the Western Reserve, including Solon, Euclid and Macedonia, were also inspired by the early Americans’ fascination with the ancient world.

According to advertisements and rumors that spread from farmhouse to village, this new land in the West was not a grim wilderness, but Eden itself, an earthly Paradise where the ground was level and fertile and the climate mild.

The pioneers traveled mostly by horse and covered wagon loaded with every possession — a bed, a chest, some quilts and featherbeds, a trunk full of clothing, and, of course, the family Bible. They also brought with them a sense of community that resulted in the quick establishment of churches, schools and libraries. Over the years, this young farming community grew. Foot trails became roads. Farmlands gave way to nurseries. Ultimately, Mentor became the major commercial center that we know today.

Books on the History of Mentor

Want to learn more? Mentor: The First 200 Years was published in 1997 as the first comprehensive history of Mentor. It is filled with pictures and interviews from people that remember what life was like before the freeways and shopping centers. Copies are available at Mentor City Hall by stopping by the Recreation Office, or by calling (440) 974-5740. Copies are also available at the James A. Garfield National Historic Site.

Some of the earlier books written are no longer in print, but may be available at the Mentor Public Library, Morley Library in Painesville or The Lake County History Center. These include History of Mentor Headlands and Vicinity (1957), By the Buckeye (1984), and Mentor – a retrospective (1988).

Mentor resident Thomas G. Matowitz, Jr. has written a new book (2015) about the history of our community. Mentor chronicles the history of Mentor through rare photos and interesting stories. This new book features 186 images and tells the story of Mentor from our settlement in 1797, to the thriving City it is today. The volume also highlights citizens who have helped shape the community – including local farmers, wealthy Cleveland industrialists, a Civil War Medal of Honor recipient as well as the 20th President of the United States, James A. Garfield. Mentor is a part of Arcadia Publishing’s Portraits of America series and is available at Barnes & Noble and other local bookstores as well as amazon.com.

Mentor is the home of James A. Garfield, the 20th President of the United States. In 1880, James Garfield used his front porch as a platform to greet thousands of well-wishers during his presidential campaign. You can visit the James A. Garfield National Historic Site and learn about Garfield’s legacy as well as unfulfilled promise.

Do you or a family member have any old photos, film clips or other historical items of interest related to Mentor that you’d like to preserve for posterity?

The City is always looking to expand our archives. We can carefully digitally scan both photos and film and we’d be happy to share these digital transfers with you at no charge. If you have an object or a letter, we can photograph these as well. Most of all, if you have a back story regarding the content, we’d love to hear about it!

Contact our Public Information Office at 440-974-5794 or pubinfo@cityofmentor.com to learn more.